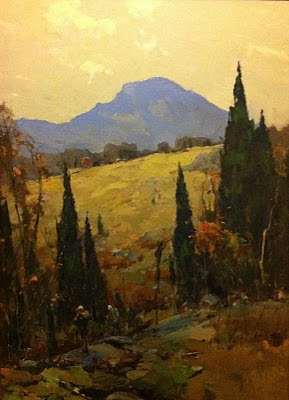 You won’t find Chauncy Foster Ryder in many of the standard art history books. He was born in Connecticut and studied at the Art Institute in Chicago. He moved to New York City and opened a studio there in 1909. At the same time, he also bought property in Wilton, NH, and for the rest of his life, he divided his time between New York and New Hampshire.
In 1910, he traveled throughout New England, providing locales for many of his subsequent paintings. That year, future president Woodrow Wilson and his wife Ellen bought one of his landscapes, Valley of Assisi, to celebrate their 25th wedding anniversary. 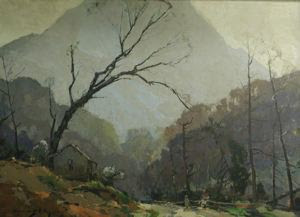 Bear Creek, Chauncy Foster Ryder, undated
It’s been pointed out that Chauncey Ryder favored a peculiar green-gray palette dubbed “Ryder Green.” His style corresponds to that of other pre-WWII, post-Impressionist landscape painters of New England who are better known (but still relatively obscure) such as Aldro Hibbard, Charles Hawthorne, and John F. Carlson. His work stands out from theirs as more tonalistic, mostly quiet and softer, perhaps more emotional. As one writer saw it in 1978, Ryder painted with intuitive feeling in pursuit of “the poetic aspect of nature.” The term “post-Impressionism” applies because these paintings do not look like the paintings of the French Impressionists – Monet, or Renoir for example – but wouldn’t have been possible without them.
A close look at the details and brushwork on The Long Trail reveals the hallmarks of the style, which  lands somewhere between Impressionism and gestural abstraction. 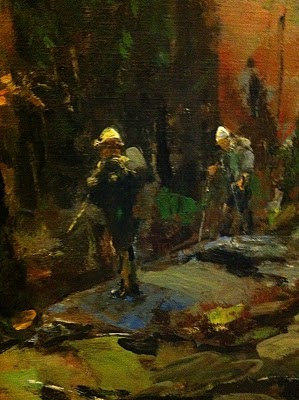 The color in these photos is a bit artificially saturated, but it does show how many colors Chauncey Ryder was likely to use in a given square inch or two of canvas. Innovative use of multiple colors and very loose paint handling (“spots of color,” as Hawthorne said) entered the American landscape tradition at this time, when modernist abstraction dominated painting and representations of nature were thought predictable and passe.
And this is why the work of these artists found favor with sympathetic critics and the public. Chauncey Ryder struck a balance that the general public could relate to. He was popular, as a curator of Boston’s Child’s Gallery put it, for “the way his landscapes engaged the aesthetic of the abstract without presenting abstract subject matter, in a time when the general public was unsure about how to approach truly abstract art.” 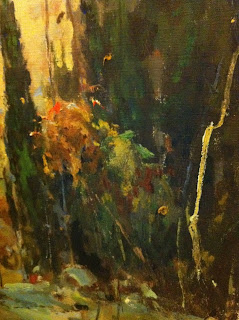 And here is a visual analysis of the composition of the painting that points to why it works so well. In addition to the careful design, which creates a vigorous rhythm of criss-crossing vertical and horizontal lines, the center of the painting draws attention as the warmest region (relatively warmer colors are said to “advance” while cooler ones recede) within an interesting alteration of complementary warm/cool fields. 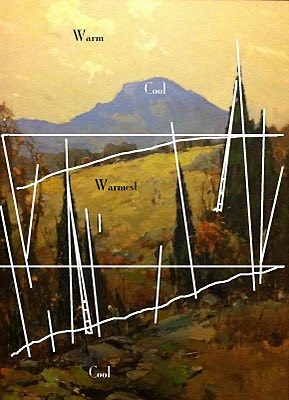 Compositional geometry and temperature variation in The Long Trail

Chauncey Ryder seems to have lived a life devoted to his art, encouraged by a supportive wife who was willing to sell everything they owned and move to Europe so he could train in France. Below is his academy painting. Depicting wary onlookers eyeing the detritus of a shipwreck, it shows that he had no problem adapting his style and subject matter to the prevailing tastes of the day.
For me there’s poetic resonance in how the figures strain against the strong and presumably cold sea-wind. The young women’s dark billowing dresses already have the starkness of mourning clothes, and the punishing wind coming off the ocean suggests the wider theme of human vulnerability in the face of nature’s harsh realities. That Which the Sea Gives Up (Ce Que Rende la Mer) was first exhibited at the Paris Salon of 1907. Today, this painting is available through Child’s Gallery, known for its celebrated collections of New England Impressionism, Maine art, and prominent nineteenth-century artist’s estates.

Chauncey Ryder was awarded honorable mention and was one of only three Americans to win an award for painting at the Salon that year, according to Child’s. Soon after the Paris Salon, “That Which the Sea Gives Up” was exhibited in the “20th Annual Exhibition of American Oil Paintings and Sculpture,” at the Art Institute of Chicago alongside works by renowned American artists James A. McNeill Whistler, Childe Hassam, Winslow Homer, and John Singer Sargent. Chauncey Ryder died in 1949. His works are seldom exhibited, though they reside in many of the most important museums of American art, including New York’s Metropolitan, the Art Institute of Chicago, and the Corcoran Gallery and the National Gallery in Washington, D.C. “This artist recognizes the power of neutral mixtures. The sky colors glow with vibrancy but are not garish. These moments are fleeting, and the brushwork helps us to feel that. Restrained values in the ground plane, trees, and farm provide a solid foundation and support the expanding clouds. All of the edges within that lower third of the painting are lost. It takes us a while to take a look and find what is there. Then we see the barn’s roof and how it is gently connected to the cloud pattern, absolutely brilliant.”