Every now and then you have to tell your logical brain it’s only a co-pilot.

While your critical, rational brain isn’t looking, push the eject button under its seat and do wild improvisations – chase the wind – play jazz. Make unruly marks, make mistakes, break the rules, let the paint do whatever it feels like doing. Throw caution to the wind and see what happens – you don’t need to show this to anyone, and this is definitely not a test of whether you’re worthy or “talented enough” to be an artiste. It’s just you, playing. 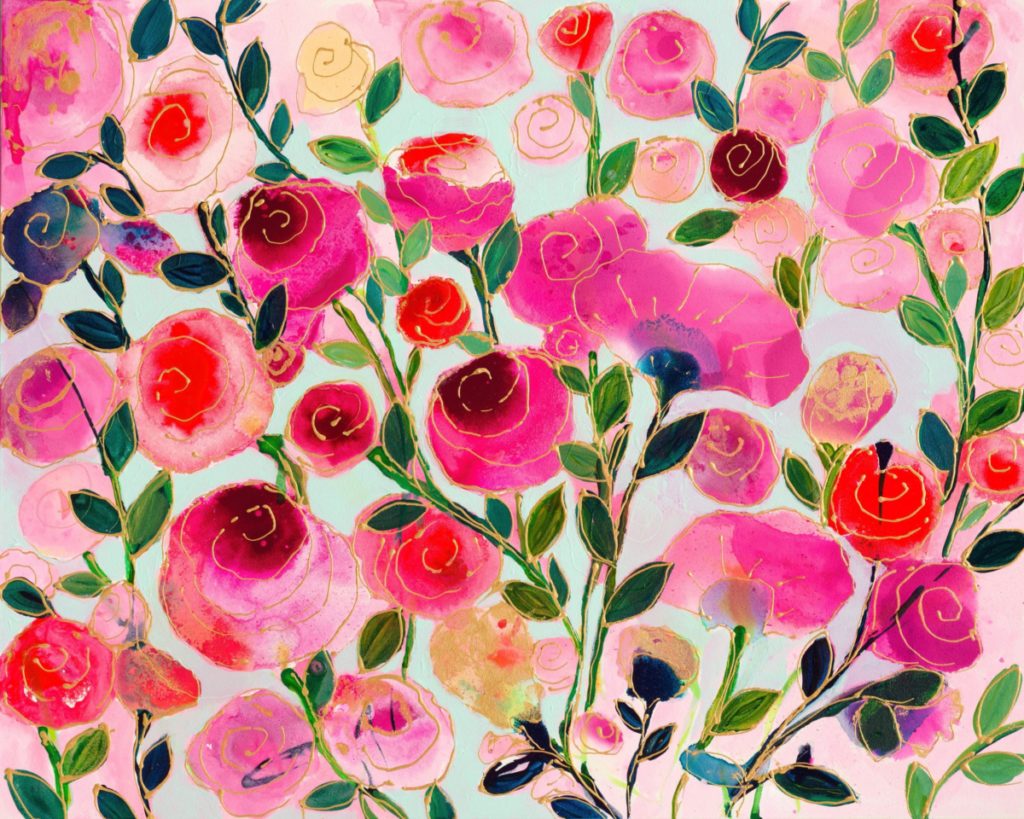 Carrie Schmitt, Full of Joy. From her home in the quaint seaside village of Steilacoom, WA, Carrie Schmitt paints, writes, and hosts art retreats centered on creating, connecting and healing. She has published several books and completed an inspiring and playful video.

Why do this? Because fear is Enemy #1. Fear muddies your colors, constricts your looseness,  stifles your freedom and kills your work’s feeling. Overcoming fear it takes practice, just like learning technique – I don’t mean just practicing painting, I’m talking about practicing painting fearlessly.

Poet Diane Ackerman says, “play is the brain’s favorite way of learning.” Asking what if …. ? – and trying it and finding it out – is the essence of insight and innovation. That’s what scientists, entrepreneurs, and creative artists, writers, and musicians of all stripes do. They ask what if….? and then find out and take it from there. The best way, or at least the funnest way to make art, is to make it the way you like, not the way you think you’re supposed to.

Many find it easier to just play once the “real work” is over. So, right before you put away your tools for the day, take what’s left – crumbs of charcoal or pastel, the paint left on your palette – and use it to create something shockingly frivolous. Tell yourself you have to use it all. Move fast and aim to surprise yourself, devil take the hindmost. When it’s done and before you do whatever with it, consider snapping a photo of the thing so you can try croping out pieces from it on your phone or computer – maybe there’s an idea you might want to follow up on. Or maybe not – so what?

Plenty of times painters whose works I’ve liked have said, “Oh, I just painted that in five minutes because I didn’t want to waste the leftover paint on my easel.” That tells you half the trouble of painting is that we’re trying too hard by half.

If you’re looking for some encouraging instruction to inspire productive playful abandon combined with sound technique and academic rigor, check out some of these video selections that bring out the wild horses AND hitch them to the wagon.

Plein Air in the Hebrides by Vintage Fishing Boat This “gallery” of Ross Ryan’s shows it doesn’t take much more than the right spirit, imagination, and courage to make plein air painting your passion.

Ross Ryan is a Scottish plein air painter who works and leads painting excursions on the Atlantic Ocean off the coast of Argyll and among the Outer Hebrides Islands. Balancing the life of a sailor and artist, Ross has spent the last three years predominantly painting outside, often on deck of his 1947 wooden fishing boat, the Sgrabh. Have a peek at his latest show (which looks on course to crush it if not sell out) and learn more about Ryan and the good ship Sgrabh here.