Was American Plein Air Born in the Adirondacks?

New York State’s Adirondack Park contains 6 million acres of private and public land graced with mountains, streams, valleys, waterfalls, forests, fields and lakes (more than 3,000 lakes in all, actually). From its earliest exploration, the region of the Adirondack Mountains has beguiled artists lured by the prospect of nature in its purest form.

According to the New York Almanac, though tourists were flocking to Saratoga Springs in the 1830s, few ventured further north into the “lofty chain of granite” visible from Lake George. One guidebook described the mysterious forms as “a wild repulsive aspect.”

Little was known of the Adirondack Mountains until 1836, when the New York State legislature commissioned geologist Ebenezer Emmons and artist Charles Cromwell Ingham to make exploratory surveys and bring back images of the wild and rocky region. 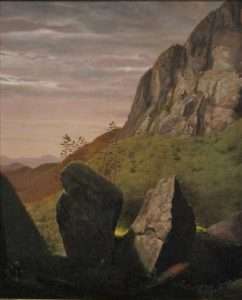 During the trip, Ingham painted The Great Adirondack Pass (right) “on the spot,” as it was noted at the time because rather unusual. Plein air painting per se wasn’t a thing in America until French Impressionism finally made an impact in the 1890s. Hudson River painters, such as Homer Dodge Martin, were much more likely to make large, expansive views.

And before that, most “topographic” paintings were strictly about recording information about a place. Ingram, though, embellished his reportage with drama and beauty by placing in his foreground a remarkable line of standing stones made mysterious by enveloping shadow.

Eventually, dozens of painters arrived who painted landscapes of the region including Thomas Cole, John Frederick Kensett, and the aforementioned Martin.

Nearly all of them, however, only painted studies – not finished paintings – on location. It was back in their New York studios that the studies and sketches they made became the sizable salon-style works to which the 19th century public was accustomed.

Artists still adore the Adirondacks for their rugged natural beauty. Folks are signing up now for the 10 year reunion of the annual Adirondack Mountains plein air event with Eric Rhoads, publisher of Inside Art and Plein Air Magazine. You can see a video about past events here.

The Cincinnati Museum of Art is showing a ravishing collection of still life paintings by Impressionist artists renowned for their diverse achievements. One Each: Still Lifes by Cézanne, Pissarro and Friends focuses on still life paintings by five French painters, all created in the mid-1860s, the formative years of Impressionism. This single-gallery special exhibition is organized in partnership with the Toledo Museum of Art, from which come several striking images, including the Cezanne below.